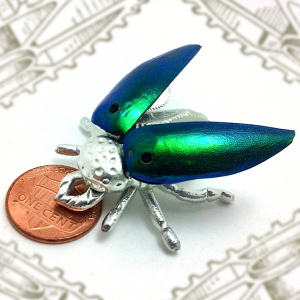 “What was that clattering sound?” I wondered aloud to myself.

It was then that my traveling companion gave a small gasp as the most extraordinary creature lighted upon my pack: A beetle with a body of shining silver, and wings of the most vivid emerald green that glittered in both hue and timbre from the angle of the afternoon sun. It chittered quietly to itself for a few moments before seeking out the highest peak in the canvas it could find. Facing the wind, it spread its wings and in an instant it flitted back off down the bridleway.

And then there was another one upon the sleeve of my coat. This one was the same as before, but its body was of an aeneous complexion, and wings of deep sea blue. However, before that one flew off to join its comrade, yet another fell upon my shoulder, and this one had wings the shade of electrum.

While we wondered at the novelty these creatures inspired within us, we did not notice that the sky was slowly darkening. And when we glanced behind, the swarm was already upon us.

– The Journal of Horatio Fenwick

Each sculpture is made to order from hand cast lead-free pewter, genuine jewel beetle wing covers, and horologically responsible spare watch parts. The gear embellishments used will vary depending on stock.